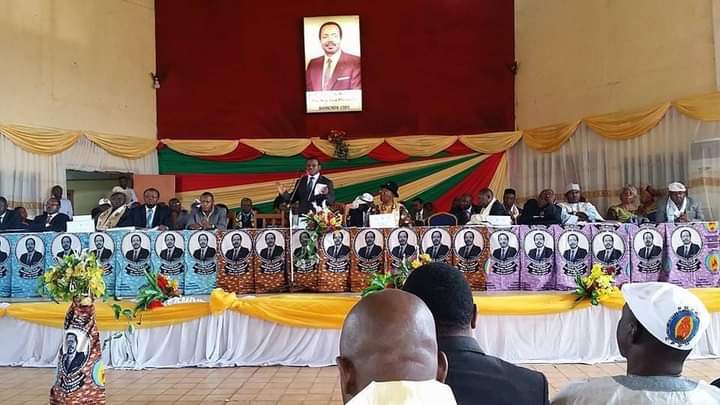 The cpdm party on Saturday 14th August 2021 launched the reorganisation of basic organs of the party in the North West region.
Heavy presence of security forces and armour cars characterized the scene of the event at the Bamenda congress hall.
Prior to the meeting on Saturday 14th of August, several neighborhoods in the city of Bamenda closed to the Bamenda congress hall were under search operation by security forces and many young people arrested.
This was to secured the smooth holding of the launch at the congress hall.
Former prime minister Philemon Yang who is the permanent coordinator of the CPDM party for the North West region presided over the launch, while calling on party aspirants of the grassroot elections to strictly respect party laws.
The CPDM officials were reminded that the party discipline and previous electoral successes are key factors which will guide the electoral process.
The permanent cordinator also called on party members to work for the return of peace in the North West region.
“ _In the present atmosphere of insecurity, everything we will do here is part of the reconstruction of this region” he stated._
“ __Reconstruction,” he added, “is at different levels. First of all the mental level. The Reorganisation of the party will tell people that we are in a region that can move towards peace and the reconstruction of houses and bridges will come. But for the moment, we are dealing with the minds of our people”._
In the days ahead, the party officials will be moving to their sub divisions for the reorganisation of the basic organs.
The main challenge the party will be facing is the insecurity that continues to rogue the North West region just like the South West region.
Makatinews
WhatsApp 671930568